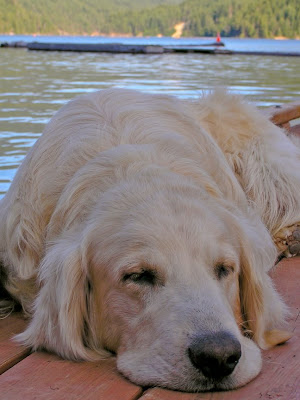 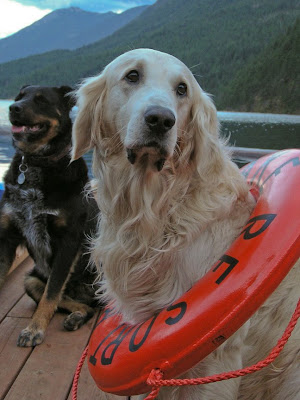 From Tom and Carol:
We wanted to let all of you know that Roland - our resort supervisor, recently passed away.
He loved all of the children that visited and as Paul mentioned in an earlier post, was a frequent visitor to the cabins that had the best cooks.
You could often look to the open door and see 1 paw laid across the threshold gently waiting for an invite, or his black nose sticking around the corner by the laundry cabin, quivering, as he tried to determine what was on the menu for the evening down at the various cabins.
Over the past 13 years Roland probably consumed more steak than any human being.
If someday archeologists were to dig on the hillside above the cabins, they would be surprised at the number of T-Bones, Rib and Porterhouse bones found buried just below the surface.
Tom mentioned that if he had his choice he would choose to come back as a Ross Lake Resort dog - and live the good life.
One of Roland's best attribute in his later years was to lead and set an example for many of our guests and guide them through his daily seminars on Non Aerobic Position Studies.
Many guests, after returning from the morning fishing, would bring their lunch and a cold beer over to the picnic table near the office and sit at Roland's feet learning from the N.A.P.S. master. Sitting in the warm sun, feet propped up, they would soon join him in the study.
Roland was 13 years old and had a kind and gentle attitude about life.
Posted by Paul Anderson at 9:34 AM No comments: