Who are they? Why are they smiling? 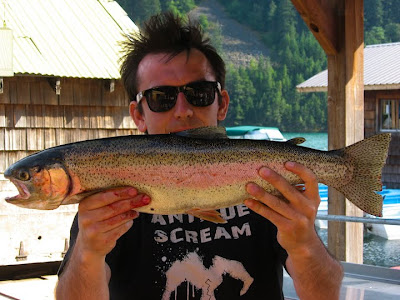 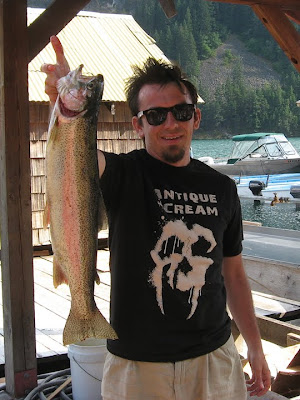 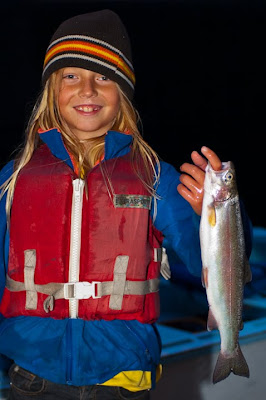 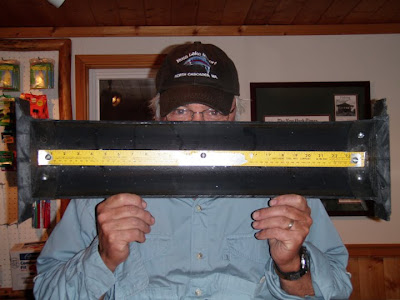 Why are they smiling you ask?

Well after several years of rapid shiner growth (the minnows you see in the lake) the wild rainbow trout are getting large enough to enjoy the shiners for breakfast, lunch and dinner. This results is some veeeeeeeery big and fat rainbows.

So big in some cases that they are starting to grow beyond the 2 foot measuring tape at the fish cleaning table.

Who is the guy with the ruler? Tom Barnett of course! Owner and fisherman muy excellente! And he is happy that so many friends and guests are being rewarded with nice fat fish.

Tom's young cousin Bode was up this past weekend and provided dinner for us. Oh man, fresh grilled wild Ross Lake Rainbow Trout! The taste was great.

Oh, and here is some more trout for you fishers!
Posted by Paul Anderson at 7:48 PM No comments: 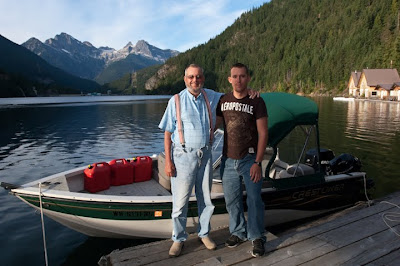 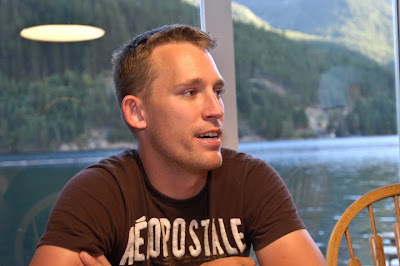 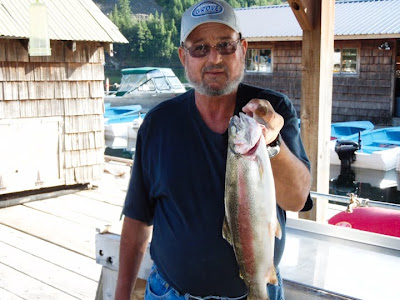 Proud that he was able to retire from a company after a long career and before it closed its doors in his hometown.

Proud of his skills as a sports fisherman and of his aluminum sport fishing boat..

Proud because he is an honorable man who has tried to live by the rules.

Proud of his country, and his family.

I recently met Joe when a mutual friend introduced us. Joe was fishing these waters for wild trout with Scott McLeod.

Scott had just returned from a long journey.

Joe has fished the waters of Ross Lake for a number of years, Scott has not.

So after Scott reconnected with his wife and two kids ages 3 and 6 over the last 30 days, Joe brought Scott up here.

Scott had just completed his third tour of duty in Iraq.

Grandpa Joe is a smart man.

It was interesting getting Scott’s perspective while gazing out at Ruby, Snowfield and Colonial Peaks. He was a foot soldier with the US Marines his first two tours and as a linguistic specialist and Arabic interpreter most recently with the National Guard.

He participated in the invasion, the long months spent finding and disassembling I.E.D’s and most recently the S.A.F.E. negotiations and withdrawals from the major cities. Scott likes the Iraqi people and he feels that most Iraqi’s like the American people.

Much of his time after the invasion was spent trying to provide basic services for the Iraqi people - water, power, education. He has helped provide water to truck farmers who previously eked out an existence from their dry, parched plots of land. He has helped farmers till the soil.

Iraqi men who worked, who could provide for families are less tempted to accept outside money to lay down I.E.D.’s. They were able to keep their families from starving.

Scott has seen women’s rights flourish since the end of Saddam Hussein’s regime.

We talked about what was working and what wasn’t from his perspective.

Sitting here in the middle of the North Cascades and talking with Scott, it didn’t feel like a 30 second sound bite from Fox or MSNBC. It didn’t feel like the glowing reports from John McCain and Lindsey Graham nor the doom and gloom from their counterparts.

It felt like the report and perspective, with intelligent insight, of a young soldier who is trying to serve his country with dignity, with honor.

So what did I learn from this discussion here in the middle of the North Cascades?

Maybe we need, as a country, to lead and vocalize more from the middle rather then the edges.

Maybe we need to tone down the rhetoric and think more about the common good of the American people rather than being obstructionists in the political arena.

Maybe we need to think about the needs and requirements, jobs, education and health of middle class families like Scott’s and his Grandpa Joe rather than redistributing the wealth of average Americans and concentrating it up to the banks, Wall Street, multi-nationals and large corporations.

Scott will graduate soon with a degree in middle eastern studies. He is already fluent in Arabic.

After he has his degree he will apply for officer candidate school and a career in the US Marines.

Scott, thank you for your service to America - to us.
Posted by Paul Anderson at 10:37 PM No comments: 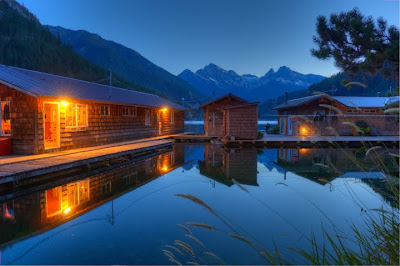 It has been a wonderful summer up at the resort. Some of the best weather in years. The fish have been biting and guests have caught large Ross Lake wild rainbow trout. So large that some don't fit in the 24 inch measuring tray at the fish cleaning table.

If you happen to be out on a hike and are returning a little later than you normally would, or hiking in later from hiway 20 and across the dam, you will be greeted by the warm lights of the resort. Our office hours are 8 AM until 8 PM.

Enjoy the season.
Posted by Paul Anderson at 7:19 PM 1 comment: