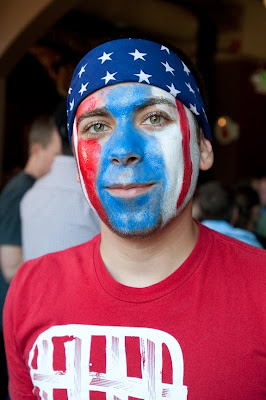 Okay, ok, I'll get to the point about why I am writing about a soccer match on a fishing resort blog in a moment.

I spent part of the late morning and early afternoon watching the USA tie England - whoops I meant to say ENGLAND TIED THE USA - in first round action of the FIFA World Cup from South Africa.  The Copper Hog Gastropub in downtown Bellingham was our venue

I played rugby for about 25 years, I don't understand the nuances of soccer. I am about as close to being a soccer player as maybe a ballerina is to being a belly dancer.  Well, I don't think that came out the way I meant,  But what the heck.......

So I'm sitting there enjoying the soccer action, my friends, and people watching and I started thinking about how much in common fishermen have with soccer fans.

I mean I have seen some crazy bandanas on fishermen and weird zinc oxide concoctions to ward of flies, skeeters and sunburn over the years.

There are many fishing hats out there with either flies or small lures snagged to them.

And I have seen some innovative knots and slings piecing together creels or holding together fishing nets.

And most fishermen I've met seem to be fairly patriotic. 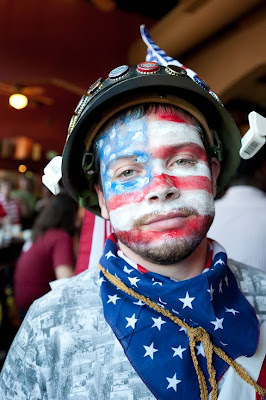 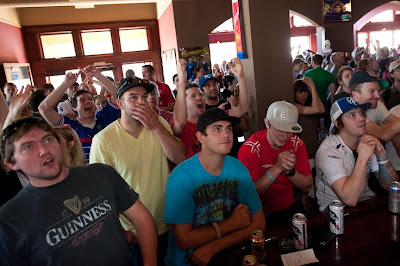 Haven't we prayed to the fishing gods at least once, "please -  keep the dang fish on the hook & don't let it flop away?" 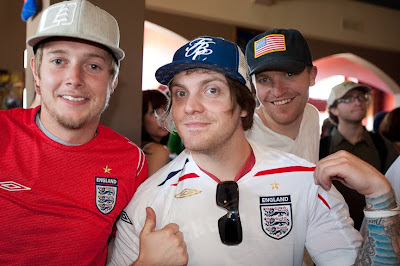 And like these knowledgeable English fans - who think they dress a little more sophisticated than the average USA fan, aren't they sorta like fly fishermen??

And haven't you secretly hoped that your buddies - or at least the wife and kids - would greet you back at the cabin like this when they see the size of those wild Ross Lake Rainbows you just brought in? 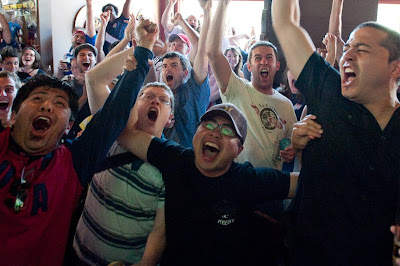 click on photos to enlarge.
Admit it Dad's and Grandpa's - don't you do this quietly inside your chest every time your kid or grandkid hooks a wild fish?


its the same the whole world over,
it's the poor what gets the blame,
it's the rich that get the glory,
ain't it all a bloody shame!


-from an old rugby song.
Posted by Paul Anderson at 7:00 PM No comments: 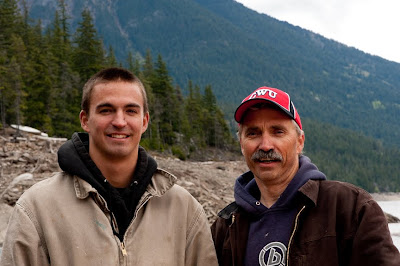 Mark has known Tom since the early 70's and has come up every year since to fish and vacation with the family.  He has also made countless trips to help build and do repairs.

I asked Adam how long he's been coming up here and he said "well, since I've been born!"

Puts it in perspective eh?

Dad Mark, teaches business courses at East Wenatchee High.  He owned a construction company and has passed those skills onto all 4 sons.

In essence, it's obvious that all 5 men in the Bloom family know which end of the ball peen hammer  hits the thumb! 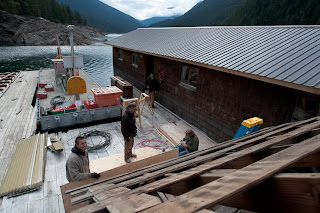 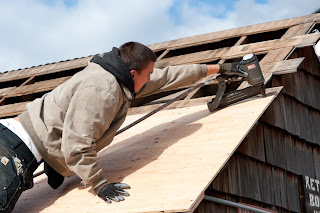 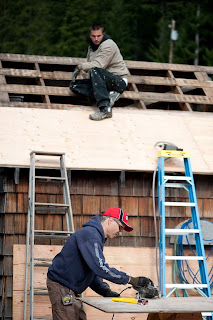 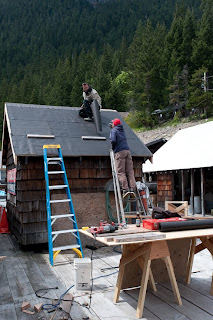 Posted by Paul Anderson at 10:47 AM No comments: 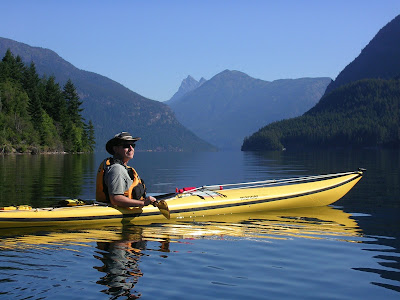 photos this post all © Ralph Leitner
Great shot Ralph! It says it all for your family - you, paddling, your favorite hike here up - Desolation
and Ross Lake!

Ralph and his family and friends have been coming up every year to paddle these beautiful waters since the early 1990's.

Ralph first visited Ross Lake and the North Cascades in the 1970's when his Boy Scout Troop hiked 50 miles from the Canadian border down the Eastbank Trail to a gravel road that is now highway 20.

He returned with his troop to paddle 50 miles on Ross Lake,  the seed was planted - he was hooked.

He and family and friends have made it back every year since 1993 when he brought his 2 year old up here camping.

Ralph's favorite hike is the Desolation Trail up to the lookout.  One year camping out next to the cabin he met a group from the North Cascades Institute.  They were having one of their famous field seminars where they were studying the beat poets and writers who frequented these beautiful peaks and valleys in the 50's and early 60's.

What could be better - hanging out with family and friends watching the sun set over the Pickets and North Cascades listening to the words of poets and writers of several generations - Gary Snyder, Jack Kerouac, Philip Whalen, and most recently Tim McNulty - wow.

The jagged spires of Hozomeen.....


"Hozomeen, Hozomeen, the most
beautiful mountain I ever seen...... '
Jack Kerouac, Desolation Angels 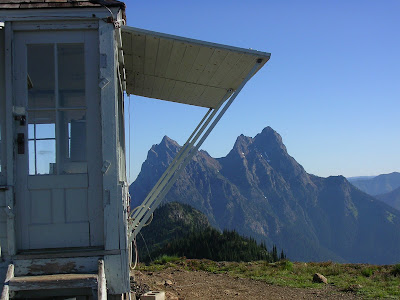 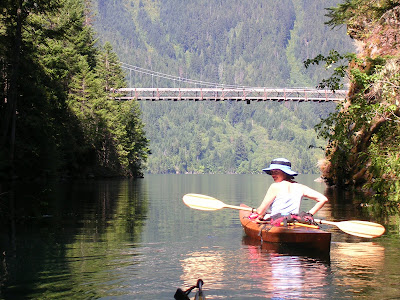 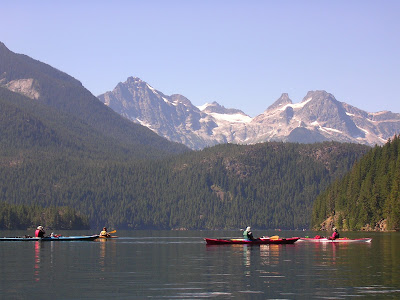 Thanks for sharing these memories, family traditions and adventures.
"Believe me, my young friend, there is nothing- absolutely nothing- half so much worth doing as simply messing about in boats."  -- Kenneth Grahame - from the Wind in the Willows


Posted by Paul Anderson at 5:45 PM No comments:

I swear - no kidding - a couple of weeks ago and before the resort opened, I rode in front of that goofy looking, lopsided grinning,  sinister pumpkin and the blue boat gave a little shudder.

It was twilight - I looked over at that thing - and it was looking awfully non-chalant about everything - but then I noticed that the Pumpkin's eyes seemed to be following me.

Next time you are up here, ask your kids and see if they don't notice the same thing.

The'll be watching - so will that dang pumpkin.

At least it will give you and the better half some time to enjoy a glass of wine sitting in one of the Adirondack chairs in front of your cabin.

The kids can stare back all they want - I don't think that beast cares.

All I can do when I see it staring back at me is shudder.

Maybe I'l go over and grab a slice of pumpkin pie with a dollop of whipped cream, ride by that thing and chomp down.

We'll see who shudders then!

Posted by Paul Anderson at 1:40 PM No comments:

Email ThisBlogThis!Share to TwitterShare to FacebookShare to Pinterest
Labels: The Pumpkin

A Most Excellent Resort Opening Day

Hi Everyone and welcome to opening day of Ross Lake Resort 2010.

Today went better than any one could have expected.  The guests are excited to be here, the staff are all happy, Seattle City Light, the National Park Service and the contractors did an amazing job preparing the new boat dock and spur haul road.

It's going to be a good year.

Seattle City Light brought in a half dozen guests on the morning high speed boat and another 10 in the afternoon.  Ross Lake Resort had a small tractor with a flat bed trailer waiting.

Per the Ross Lake Resort tradition of the last 60 years -  everyone loaded everyone's gear onto the trailer and it was all hauled up to the upper boat dock on Ross Lake -  where again everyone helped each other load onto the Ross Lake dock and then into the shuttle boat for the trip over to the cabins.

Granite Construction began working on the head scarp today. (The area of the cliff where the rock slide began).  They will be blasting, loosening, drilling, stabilizing, grouting -  probably until October.

These guys are pro's and know their business!

Portaging is going to happen - canoes and kayaks will be carried by the paddlers up to the truck turnaround.  Ross Lake Resort can haul gear up on the flatbed trailer but not the canoes or kayaks.

That's nothing for these North Cascades adventurers.

It was a most excellent opening and thanks to all of the guests who rode in and the few that are hiking in from hiway 20 as we speak!!!

There are guests sitting out in front of the cabins in the Ross Lake Adirondacks enjoying the late light. 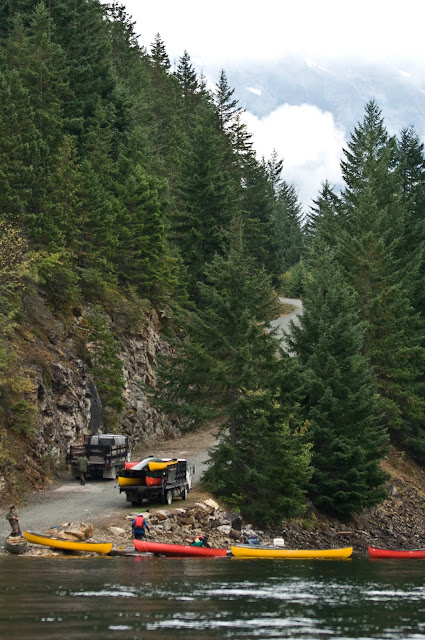 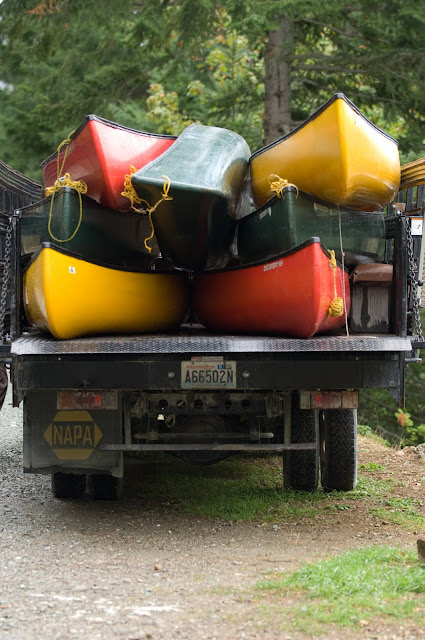 There is no phone at the new dock and you cannot access the power house.

THE ROCKSLIDE IS VERY DANGEROUS AND THERE WILL BE BLASTING ON THE CLIFF FACES ABOVE TO STABILIZE THE ROCK!

Portagers - In June you will be required to send someone up the 1.5 miles of gravel road to phone the resort and request portage service.  (Because of all the variables and potential for delays, as of today you cannot call ahead and schedule a portage pickup).

You will then carry your gear, and canoes or kayaks up approximately 100 yards to the point where the resort truck will pick you up.

Boats and motors will not be picked up because of the weight issues.

Here is the latest for guests of the resort.

Seattle City Light will pick you and your gear up in a high speed 7 passenger boat at the usual location - the dock on Diablo.

Park and unload as usual where you see Ross Lake Resort Parking.

You will unload at the new passenger dock west of the landslide.

The resort truck will pick up all guests and their gear after a short hike - for transport up to Ross Lake.

Our thanks to Tammra Sterling of the National Park Service for providing us with the information and new haul road map.

One more thing to add!

Everyone at Ross Lake Resort cannot express and thank enough the staff of the National Park Service, Seattle City Light and the contractors who all have worked feverishly since March to provide for the safety of visitors,  and for developing an innovative solution to the rock slide conundrum.

We are fortunate to have such a fine partnership.

So this summer when you are sitting in front of the cabins or riding up lake in one of the blue boats and you see staff from the National Park Service or Seattle City Light - give them a wave and thank you.

They appreciate the beauty of the North Cascades and this magnificent lake as much as you do!
Posted by Paul Anderson at 9:13 PM No comments:

Extra, Extra Read All About It 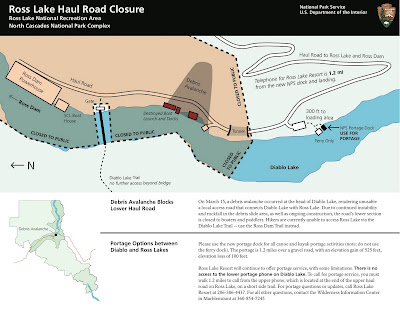 Double click on the Map
Posted by Paul Anderson at 8:06 PM No comments: