A Thursday Afternoon Drive Through The Chuckanuts

Work has been crazy and you weren’t able to sleep so you get up at 3AM and drive the 67 miles and all day it’s been one thing after another until your shoulders are so tight that it’s starting to give you a headache and then the traffic on the 67 mile commute back home is terrible too so by the time you reach Conway you decide to go backroads but you know the wife is going to call you a hick from Iowa, “that must be all they do back there on Sundays- drive backroads”, and you resent that remark because you know that you’ve been living here in Washington for 33 years and shouldn’t be considered from Iowa any more, and then you stop at the Rexville grocery and notice a nice selection of wines, cheese, micro beers, salami’s and other items you could select if you brought the wife with and wanted a picnic together but a little further up the road you drive through Bayview and look in on the workers at the boat works and hope the recession isn’t killing them like so many other small businesses and then just ahead you can look over the apple orchard and see your Chuckanuts, you drive down the slope past thousands of acres of blueberries and potatoes and corn and even wheat and then just a little past the turnoff for Samish Island you cross the Samish River and see hundreds of fishermen and realize 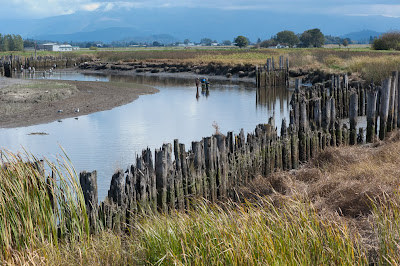 the king salmon are returning and it is going to be a great year for fishermen because these fish hold such a strong emotional grip on you and the fishermen, the Lummi’s and other Native American's, and you grab the camera and walk up one of the dikes and meet guys who are from Bellingham, Seattle, 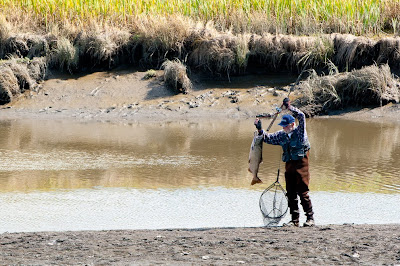 Mt.Vernon, Ancortes, Russians, Japanese, Hispanics, Pakistaniis,Vietnamese and fishermen from just about everywhere - dads, sons, young dads, old dads, young sons and old sons and all seem to have grins especially Micael the young dad who just caught a nice king and his son in the kid carrier who is looking over Dad’s shoulder to see the fish 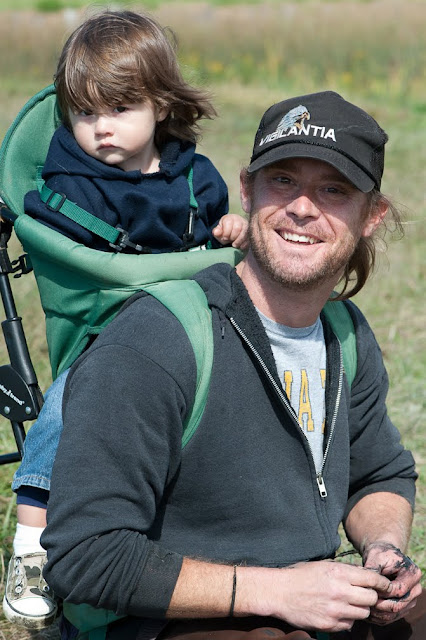 and you remember the smell of your own dad’s neck as you hung on him piggy back style when he was carrying you down the trail when you were little and tired so later when you leave the Samish after noticing a sign that this Saturday they were going to have a smoked salmon contest in a small lot right next to the river and you think, “how cool is that”, 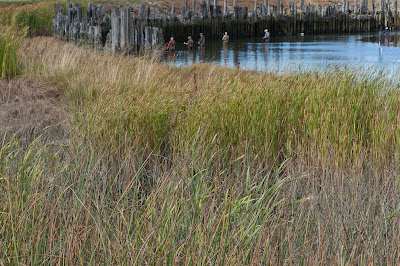 you drive by the Longhorn in Edison remembering the Oyster shooters you gave to your nephews from Montana last time they were visiting and they ate those Samish Bay oysters but were already plotting the next time you were visiting them in Montana they were going to make you try those Rocky Mountain Oysters not realizing how often you ate those things on Sunday nights when you were a ski bum and playing poker with the mayor, chief of police and owner of the Mucky Duck and they kept trying to convince you to buy a fly rod and try it out on some of the beaver ponds and streams just out your door, but you didn’t have time with all of the climbing, hiking, rugby and photography you were doing but now that you need to reduce stress in your life and have bought fly rods for you and your son maybe next year go visit your brother who is the best fisherman you’ve ever known and float down the Big Horn River, wonder what kind of hatch will be going on but hey why not try to spend a day or two on the Henry’s Fork, the Yellowstone, the Madison, and you remember a former girl friend whose dad lived each summer in a tiny trailer next to the Madison and that one summer when you visited him the editor of one of the big fishing magazines mentioned that her dad was one of the finest fly fishermen in America, 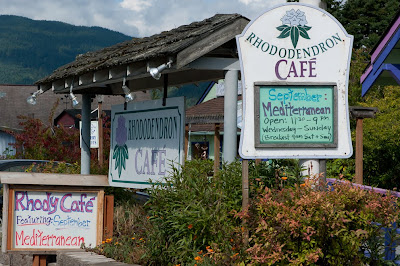 whoa pull over and see what is on the menu at the Rhododendron Cafe this month, so you get out of the car trying to determine what this months theme is and walk up to the menu by the front door and read: Chicken Saltimbocca with fresh sage, prosciutto, provolone, marsala wine sauce; Zarzuela spanish seafood stew with brandy, sherry, olives, tomato, garlic; Couscous with Lamb and Apricots, bell peppers and Moroccan spices; Grilled petite tenderloin with gorgonzola, wild blackberry demi glace wow gotta come back for dinner - must be some kind of North African or Italian, or Spanish theme, then with so much food on your mind - crazy must be hungry and you stop at the Morgan Family Farm organic veggie stand and buy on the honor system yukon fingerlings, basil, zukes, squash, carrots, onions, leeks, fennel and maybe when you get home make a curry with major grey chutney and Indian spices but just then you see something that makes you wonder why is that pod of porta-potty’s traveling across the bridge like that - you just don't see that every day and then chuckle about the time up at the Edmonton Rugby Tourny when your buddy Ed tipped one over on a guy who was rude and cut in front of him just as he was opening the door and the hideous howls emanating from within caused everyone to casually stroll out of the immediate area and then when it was finally uprighted out popped this enraged 6'6" smurf, 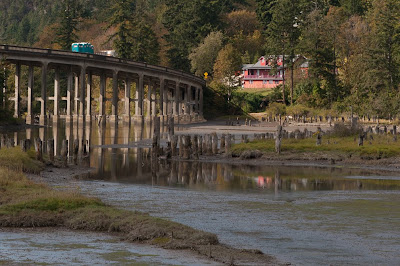 but look at the marsh grasses how would Wolf Kahn paint those and what wild colors blue maybe hahaha would he use and are those pilings from an old cannery or saw mill or do they resemble headstones in a graveyard and did Edward R. Murrow play around these pilings 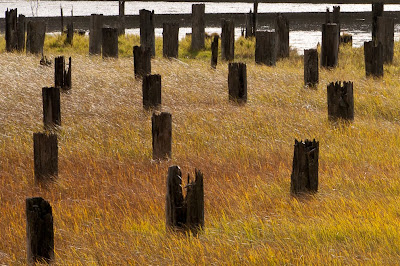 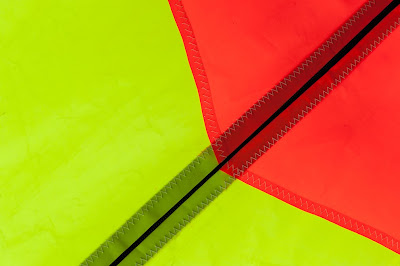 and as you cross back over the bridge you think about those porta-pottys and wonder what kinda storyline could be developed for those travelers - a day in the life of a porta potty - and you think nah that’s too bizarre and an editor would probably assign you to do it and how would you photograph it with any dignity and what if someone did take offense, because you really don't look all that great in blue and you remember those double knit blue bell bottoms your mom bought for you and the chef at the Oyster Creek Inn waves at you when you honk on the way down to Taylor Shellfish farm but soon you are back on Chuckanut and heading up Cleator road for a view and to see all the way up to Canada and over the San Juans 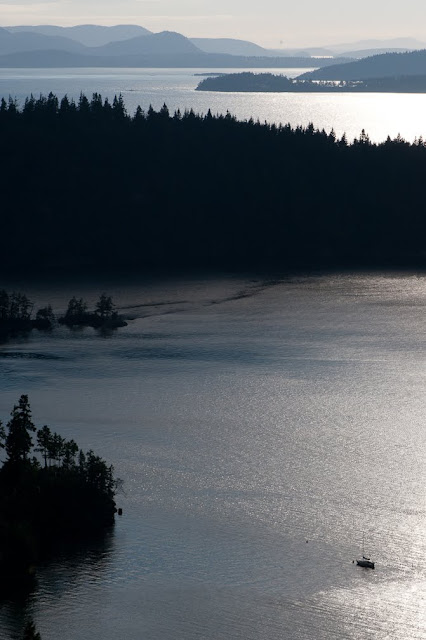 and a sailboat is at anchor in Chuckanut Bay and that reminds you of the trip you made with Joe-Joe and Punjab and the old girl friend and remember how the two of you meaning you and the girl friend not Joe -Joe the dog faced boy won the dance contest in the bar at Friday Harbor going crazy to Junior Cadillac and you stop in the cool, humid, shade of the grove of Red Alder and photograph the trunks 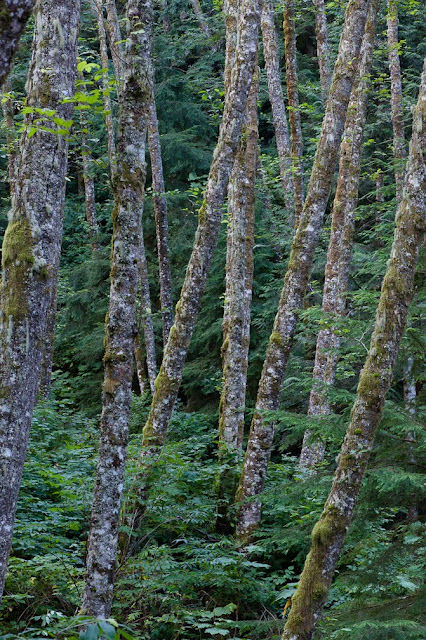 
and after you get home you grab some shavings of good cheese, crackers and a glass of wine and remember your old girlfriend died of cancer just about a year ago and sadly left a teenage son behind and you hope that doesn’t happen to you but you realize you haven’t had a headache for hours and when your wife asks what are you all going to do this weekend you say maybe you all should all drive down Chuckanut Drive to Edison and listen to a blue grass band, maybe try a few oyster shooters, maybe drink a glass of oyster or clam nectar but Ivar used to have a sign up at his restaurant that said a husband had to have a permission slip from his wife before they would serve the nectar to them and you are feeling very relaxed and your shoulders aren’t tight any more and you realize that drive thru the Chuckanuts has that same effect on you every time  but wow work well it feels like you haven’t been there for a week and you better call Jerry and finalize the arrangements because the annual September trip to Ross Lake Resort is next Thursday and this year maybe is a good time to hike up Desolation to the fire lookout where Jack Kerouac spent that summer and started writing Desolation Angels and you remember that you are gong to sleep well tonight and can’t wait to get back doing something in the Chuckanuts and your wife looks at you and smiles and you wonder if maybe there isn’t some clam nectar in the refrigerator and she says “a Sunday Drive?”
“You are such a hick........”
Posted by Paul Anderson at 8:15 AM No comments: